And Why That Shocks Americans and Brits

When Nelson Mandela -- the South African and world icon often called "the most beloved person in the world" -- died on Dec. 5-2013 at age 95, just about every prominent person in the world, and almost every world leader, rushed to make sure their comments expressing condolences received maximum print and air-time locally and worldwide. It also revealed maximum hypocrisy and cowardice on the part of many, especially American and British leaders who tried desperately to annihilate Mandela and/or keep him imprisoned for the rest of his life. For example, on Dec. 6-2013 -- the day after Mandela died -- Francisco Peregil in Buenos Aires, Argentina, wrote a major article that was headlined in leading newspapers around the world, such as Spain's El Pais. Peregil's article bore this headline: Mandela's Best Friend...Was Fidel Castro."  The fact that Americans and Brits are not supposed to read or know about such articles reflects the American and British love for imperialism and colonialism that two renowned men -- Fidel Castro and Nelson Mandela -- did the most to defeat. In 1959 Fidel Castro's Cuban Revolution ousted the U.S.-backed Batista-Mafia dictatorship. In 1961 in South Africa, inspired by Cuba's incredibly successful guerrilla war, Nelson Mandela -- a lawyer like Fidel Castro -- began a guerrilla war to overthrow England's pernicious apartheid rule of South Africa. In Cuba, a young Fidel Castro spent two years in a Batista prison before he emerged to resume his guerrilla war. In South Africa, Nelson Mandela spent 27 years in an apartheid prison with a bucket for a toilet before he emerged to become the democratically elected President of South Africa, a five-year term followed by his worldwide canonization as the most beloved person in the world, the best example of an everlasting freedom and human rights icon, a champion of sovereignty and democracy, etc. 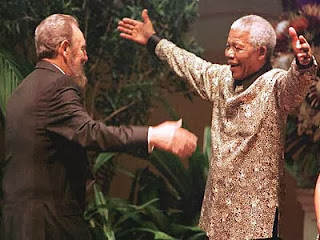 Upon his release from prison and upon his election as South Africa's President, the first person in the world that Nelson Mandela thanked and embraced was Fidel Castro, surely not the leaders of Britain and America. While in imprisoned, Mandela became aware that it was Fidel Castro who sent Cuba's best 40,000 soldiers to Angola to defeat Britain's, America's, and South Africa's powerful South African apartheid army. That monumental Cuba-led victory freed Mandela from his prison and freed Africa from the bondage of foreign domination. Yet, to this very day the citizens of America and Britain are not supposed to comprehend the affection that Nelson Mandela showered upon Fidel Castro. In fact, to this very day -- using Angola as the prime reason -- Fidel Castro's Cuba is still listed on America's "Sponsors of Terrorism" list although the rest of the world, except for U. S. sycophants and dependents, totally disagrees with that listing and considers it merely another way to appease a handful of the most visceral second generation Batistianos that the Cuban Revolution evicted from Cuba in 1959. Also, to this day American and British citizens are not supposed to know this fact: UNTIL FIVE YEARS AGO -- REPEAT, UNTIL FIVE YEARS AGO -- THE U. S. LISTED NELSON MANDELA HIMSELF AS A TERRORIST! Only five years ago, as Mandela turned 90 and his health was significantly fading, did the U. S. remove Mandela himself and his ANC anti-apartheid cohorts from the Sponsors of Terrorism list. And that, remember, was only after it was apparent that Mandela was "the most admired person in the world" and it was quite apparent that his legacy would live through the ages as the anti-apartheid, anti-colonialism, and anti-imperialism icon that, inspired by Fidel Castro, rebelled against America's and Britain's age-old domination of smaller foreign nations such as Fidel Castro's Cuba and Nelson Mandela's South Africa. 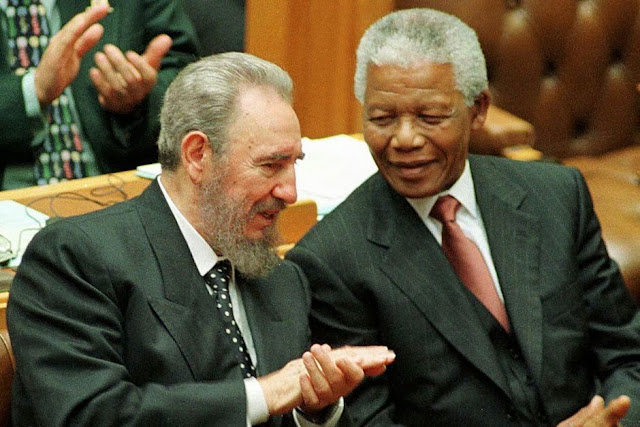 One would think, in December of 2013, the U. S. and British democracies would be strong enough to do what The Center for Democracy in the Americas, Spain's top newspaper, El Pais, and other unbiased sources did today -- and that is to explain why Nelson Mandela's "best friend" was Fidel Castro. To this day, for example, Americans and Brits are not supposed to know this basic fact: In trying to assure that the apartheid rule of South Africa was prolonged far into the future, Britain and the U. S. provided South Africa nuclear weapons. When Mandela was democratically elected President of South Africa in 1994, South Africa became the only nation in history to willfully destroy its own nuclear stockpile! This made the entire world much safer. 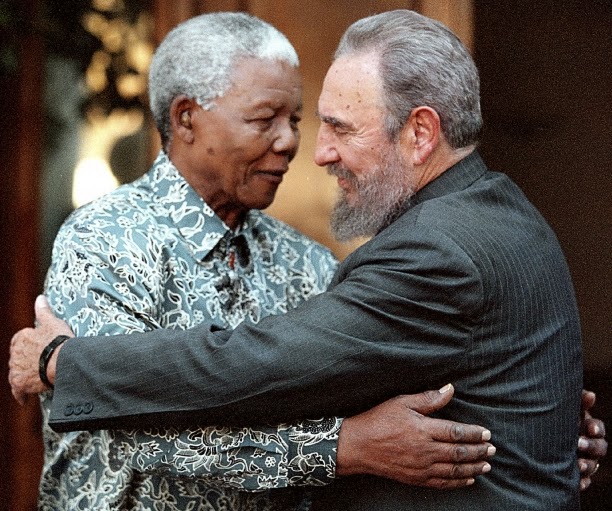 In other words, from the 19th century into the 1980s it was wrong for America and England to rape, rob, and dominate smaller and weaker nations -- like Cuba and South Africa, for example. And now deep into the 21st Century, instead of longing for their colonial and imperialist pasts, it might be timely for the United States and Great Britain to admit some truths about their Cuban and South African imperialist reigns. 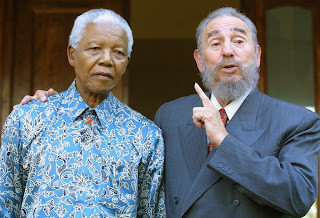 Two generations of dictatorial, anti-Castro zealots that he booted out of Cuba should not be allowed to re-write the history of either Cuba or South Africa. When he died this week, Mandela had been and will continue to be lionized and revered as the world's most beloved freedom fighter and human rights icon -- ALL AROUND THE WORLD EXCEPT IN MIAMI-Dade County THAT, SINCE THE CUBAN REVOLUTIONARY VICTORY IN 1959, HAS BEEN DOMINATED BY A MERE HANDFUL OF REVENGEFUL CUBAN EXILES. When Mandela made his one visit to Miami, he was shamefully treated rudely in a campaign directed by five Miami-area mayors. Americans were not supposed to be ashamed but Mandela's treatment in Miami resulted in a massive boycott of Miami businesses by African-Americans. The boycott was so powerful that, after three years, the political leaders of Miami actually apologized because it was adversely affecting their finances. The two Cuban-exile priorities -- money first and revenge against Castro second -- have shamed America's democracy. Americans have been proselytized or intimidated into giving Miami-Dade County a pass on being the only place in the world that mistreated Mandela because he was Fidel Castro's friend; for giving Miami-Dade County a pass for harboring well-known terrorists because, after all, the victims were/are innocent Cubans; for reconstituting the Batista dictatorship on U. S. soil, etc. 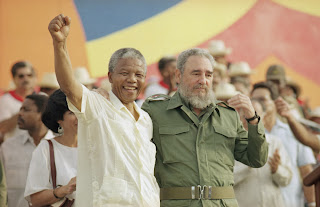 The photo on the right shows Nelson Mandela and Fidel Castro celebrating in Matanzas, Cuba, in 1991 shortly after Mandela had been released from prison. In Matanzas that day Mandela said, "My dearest friend Fidel and Cuba freed me and freed Africa. We in South Africa and in Cuba are used to stronger countries wanting to carve up our territory and subvert our sovereignty. It is unparalleled in history what Fidel accomplished in Cuba and now what he has accomplished in Africa." As a democracy-loving American, I point this out not because I desire Americans and Brits to like Fidel Castro or to love Nelson Mandela. Rather, I point this out to suggest that the American and British democracies in 2013 should be strong enough to admit the various documented truths about...Nelson Mandela, Fidel Castro, South Africa, and Cuba. History deserves a true telling. Mandela, Castro, apartheid, and Batista represent history. To distort them is to distort history AND democracy. 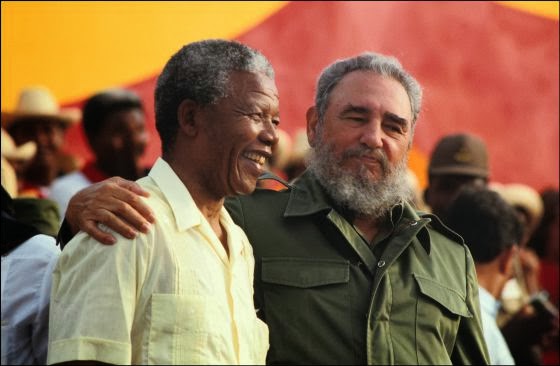 These two men carved out historic niches.
People have a right to judge them -- to love them or hate them.
But a handful of self-serving, revenge-minded Cuban exiles should not be given a license to distort them. 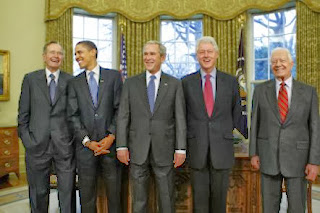 All the leaders of the world, including America's five still-living Presidents -- were quick to register their heartfelt condolences within minutes after the death of Nelson Mandela. Mandela liked the three Democratic Presidents on the right but disliked the two Republican Presidents. As a lifelong conservative, democracy-loving Republican, I understand why. And I believe, within the bowels of the modern U. S. democracy, it is alright for Americans to study whys and why-nots, especially if they would like to prolong their democracy and learn from its past mistakes in places like...South Africa and Cuba.