The U. S. Atonement Is Overdue 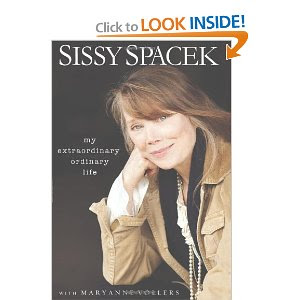 Amazon.com, the world's top book-seller, loves me. In the past few months I've bought and read nine hardback books -- all biographies. The one I just finished was Sissy Spacek's 2012 memoir "My Extraordinary Ordinary Life." 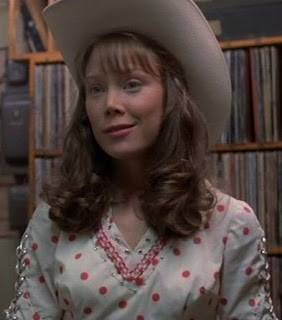 Sissy Spacek's 1980 portrayal of Loretta Lynn in "Coal Miner's Daughter" won her the Oscar as "Best Actress" and crowned her rise to super-stardom in Hollywood. 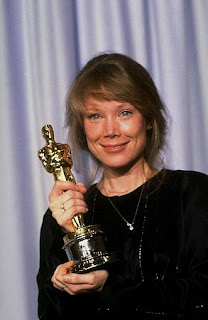 In the past three decades Sissy Spacek has justifiably won many accolades and her new memoir is gripping. Of particular interest to me was her remembrance of going on location in Mexico in 1980 to film the movie "Missing." It was a pulsating movie set in Chile and was based on the 1973 U. S. - inspired overthrow of the democratically elected Salvador Allende whose death enabled the U. S. to install the murderous dictator Augusto Pinochet for the next 19 very bloody years. On Page 204 of her excellent memoir, Sissy Spacek wrote these words regarding her preparation for her leading role in that movie: "I have to admit I knew next to nothing about the political turmoil going on in South and Central America during the 1970s. But preparing for the movie was a quick education. I was shocked and disillusioned when I learned of our government's complicity in so much brutality and suffering." Sissy Spacek is a very intelligent and well educated American. And she grew up in a political setting in Texas; her grand-father was a dear friend of former President Lyndon Johnson. But it is not surprising to me that Sissy Spacek first learned of a monumental event -- the U. S. role in the overthrow of the democratically elected Allende government in Chile to install the murderous but "U. S. Friendly" Dictator Pinochet -- accidentally as she studied for a movie role. 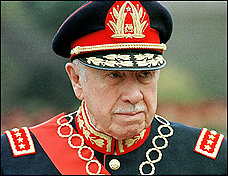 General Pinochet was such a murderous fiend for almost two decades that he famously ordered the bloody murders of a Chilean diplomat and his beautiful American aide, Ronnie Moffet, within sound of the White House in Washington, D. C. in 1976. To this day Chile, like other Latin American nations, is still trying to come to grips with the ashes and bones left behind by "U. S. Friendly" dictators of decades past. Chile, for example, has begged key Americans such as Henry Kissinger (a renowned Pinochet-supporter) and George H. W. Bush (CIA Director in 1976) to provide their ongoing investigations with specific information and Chile has been rebuffed in those efforts. Such anti-democracy tendencies by the U. S. from the 1950s into the 1980s helped inspire the waves of democratic elections that finally swept over Latin America. The American democracy since the 1980s should have been strong enough that intelligent, well educated Americans like Sissy Spacek could have been told about the U. S. over-throwing beloved democratically elected Presidents like Allende to install killer dictators like Pinochet, especially when the justifications included allowing rich American businessmen to rape and rob helpless nations during the reigns of "U. S. - friendly" dictators, something they could not have done under  democratically elected  governments. 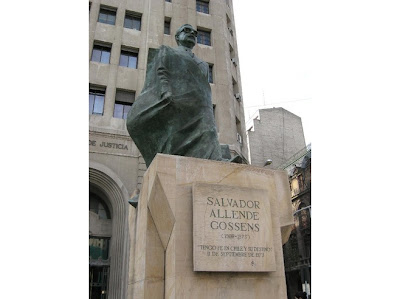 Monuments and statues honoring the beloved Salvador Allende abound today throughout Latin America, especially in Chile and Cuba, but not in the United States. 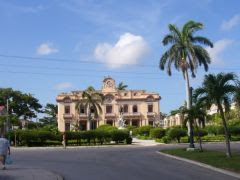 The photo above shows the Salvador Allende Hospital in Havana, Cuba. 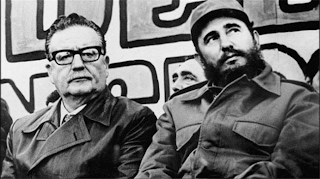 Salvador Allende and Fidel Castro were dear friends. At the meeting above, Castro had just told Allende that the CIA was backing a coup to overthrow him. Shortly -- on Sept. 11, 1973 -- Allende died defending his presidential palace with the engraved AK-47 rifle that Fidel Castro had given him as an inaugural gift. Sissy Spacek and other Americans, I believe, have a right to know about such things...even if...it might cause them to ponder: The decent, democratically elected President of Chile, Salvador Allende, was a dear friend of Fidel Castro; the murderous dictator Pinochet, who replaced Allende, was a dear friend of President Richard Nixon and his top adviser Henry Kissinger. Is there...something wrong with that picture? Yes, I think there is. I think Americans like Sissy Spacek have a right to know the truth about Salvador Allende and Augusto Pinochet, and why Chile to this day is still trying to come to grips with those dark days, without much help from classified U. S. data that could shed additional light on the events that gave rise to Pinochet's rule and longevity, putting an end to Chile's initial efforts to embrace democracy. 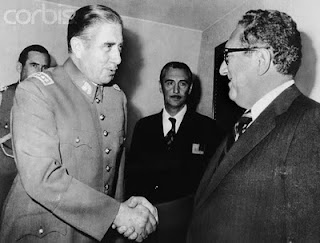 Sissy Spacek, for example, should finally hear from Henry Kissinger why he was so fond of General Pinochet and why he advised President Nixon that they could not accept the democratically elected Salvador Allende as President of Chile. Many democracy-lovers await Kissinger's explanation. 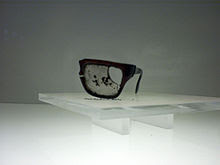 The bloody, broken glasses above were the ones President Allende was wearing when he died in his office at Palacio de la Moneda in Santiago, Chile.  Latin Americans are much more attuned to the significance of those historic glasses than Americans are and that fact bespeaks of the glaring lack of transparency in the U. S. democracy, as Sissy Spacek alluded to in her splendid biography.
****************************