America, Cuba, and the Arts of Stupidity and Greed 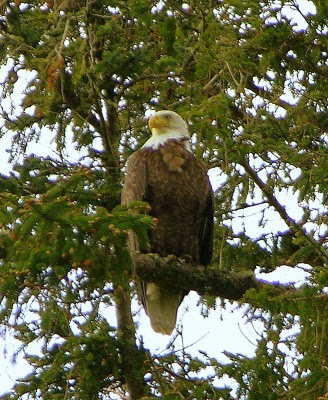 The majestic eagle still sits proudly, protectively, and pensively as America's sentinel and as the stoic symbol of a nation's strength, goodness, and greatness. 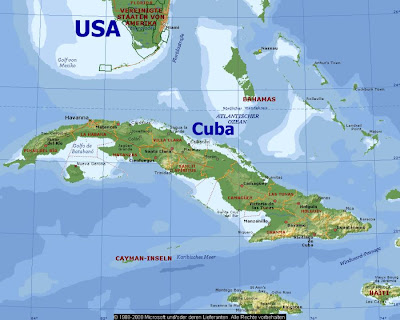 Due south of America, Cuba remains the largest island in the Caribbean, dwarfing all others in the region, including the nearby island of Hispaniola that includes Haiti and the Dominican Republic. As friendly neighbors, the USA and Cuba would markedly improve the lives of 315 million Americans and 11 million Cubans. The mutual positive involvements of the two nations' vast resources and human productivity would drastically upgrade humanitarian conditions regionally and internationally, and exponentially encourage peace movements around a troubled world. So, you ask, if such simple basics would surely provide gigantic mutual advantages for both the USA and Cuba, why has that not materialized since the 1950s? The answer is rather simple: It has not materialized because a minute minority benefits immensely from the revengeful antagonism and wholesale villainy that persists between the two neighbors. And that fact is exacerbated by another undeniable fact: The art of greed that drives the salacious minority is matched by the art of stupidity {and cowardice} that inculcates the vast majority of Americans and Cubans who compliantly allow, decade after decade, the status quo to continue.

Without trying to pontificate, the above conclusions resonated out to me after reading a couple of articles about Scandinavia-Europe in London's The Guardian, which is perhaps the world's best newspaper. The Scandinavian countries of Norway, Sweden, Finland, Denmark, and Iceland often finished one-two-three-four-and-five -- competing only with themselves -- in international polls, many mostly paid for by the U. S. -- on such topics as: "The Happiest People in the World;" "The Best Educated People in the World;" "The Best Universal Health Care in the World;" and so on. Since 2011, for example, Norway alone has finished #1 in the world in topics such as "Best Education," "Best Universal Health," "Human Development Index," and "Democracy Index."  As I studied that data, it is apparent that the five Scandinavian countries have one thing in common: They hate foreign wars and, dating back to World War II, they have tried mightily and successfully to stay "neutral" in foreign conflicts. That, of course, saves a lot of money and other resources that can help their own people. It seems, in contrast, since World War II ended in 1945 Americans and Cubans have simply not been as intelligent, as patriotic, as brave, or as decent as the people in the above five Scandinavian nations -- Norway, Sweden, Finland, Denmark, and Iceland. 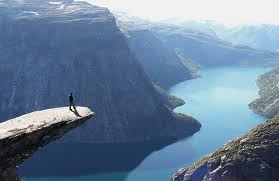 Let's take Norway {above]. It has five million people. It's per-capita income is among the world's highest -- $54,000 per year. The hearty Norwegians love the outdoors and spend much of their time partaking the wonders of their beautiful, huge, sparsely populated country. 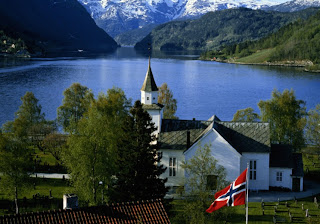 The environmentally-sound, bucolic nation of Norway [above], in addition to the high wages of its citizens, showers its people with luxuries. Time Magazine featured Norway in an article that showed a Norwegian farmer admiring his cattle. He explained that, like all Norwegians, he gets a government-paid 30-day vacation with his family to anywhere in the world. He merely had to fill out a sheet telling the government what needed to be taken care of on his farm while they were gone. The article said it was normal for Norwegians to speak five languages fluently. It said Norwegians could expect to get a letter from the government with notices such as: "The latest big-screen television is ready to be shipped to your home. You need to fill out the attached form and mail it back so we will know when it is convenient to install it in your home." All that, of course, is free of charge in a nation with high taxes but, as you might imagine, in a nation of citizens more than willing to set the rates of those taxes and then pay them. And Time Magazine explained that 25% of Norway's wealth is from its vast North Shore oil supply and the nation has saved and invested so much of that largess that "if it cut the spigot on the North Shore oil today, it would still have enough money from that spigot in reserve to guarantee the same lifestyle for its citizens for the NEXT 500 YEARS!" Norwegians, you see, are not worried about "a fiscal cliff;" they are not mad at a government geared to favor the very rich; and they actually toss out incompetent, corrupt incumbents. 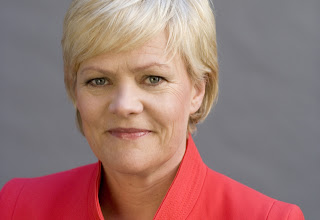 Kristin Halvorsen {above} was Norway's Minister of Education a couple of years ago when she was besieged by delegations from other countries flying to Oslo to inquire why Norway was finishing #1 in the world on so many polls -- education, health, happiness, democracy, etc. She finally got a little peeved because, after all, she had other things to do -- such as running her nation's education system. So by the time the American delegation reached Oslo, Ms. Halvorsen threw up her hands and said, "OK, that's enough! I'll talk to one more foreign delegation but this one we will video tape and then pass out copies of the tapes to all the other delegations, complete with translations where needed. I've got work to do or else {she said without cracking a smile} Norway might fall to #2 in the world when it comes to education!" 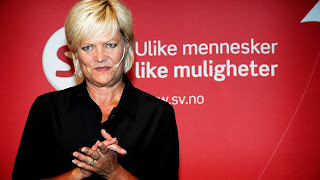 While Norway's Minister of Education, Kristin Halvorsen, could joke about her country's lofty rankings on international topics that mattered, the American delegation that went to see her also discovered how peeved she was about the avalanche of visitors. The buzz throughout Scandinavia and Europe for two years has dissected the alleged "tongue-lashing" she gave the U. S. delegation, both during the official taping session and the aside conversation in the hallway. It supposedly went like this: "You people fly from the United States to Oslo to find out why we are so far ahead of you in educating students. As I became Minister of Education in Norway, I studied the U. S. education system and vowed to do the opposite. I have done that and that is why even the poll funded by the U. S. shows us #1 in the world. We spend about $4,000 per student. You spend about $12,000 or more per student. But our $4,000 goes to educating the student while I and other top officials make good but not astronomical salaries and benefits. We have, for example, an excellent higher education system that is free for all Norwegians. Your politicians tell your apparently not-to-intelligent voters, 'Hey, we just passed a great bill that assures every person in the U. S. can have a college education!' The ignorant Americans say, 'Great! I'll not only vote for you but I will contribute money to your campaigns.' The politician then goes to see the billionaire banker that really bank-rolls his political career and says, "Hey, we just passed a bill that will guarantee you billions more in profits without risking a penny. Any American student can now borrow almost unlimited amounts of money to go to college and you lend it to them. You charge outrageous interest on the loans and every penny is guaranteed by the government, not the student, to pay you back in full! Now, I know you are already a billionaire because of other such deals we've made for you but more billions of dollars from this scheme was easy as pie so I said why pass on it.' The billionaire giddily thanks his bought-and-paid-for politician, the ignorant taxpayers are also happy, and most of your college graduates have problems trying to pay back the loans that, in the end, the U. S. taxpayers mostly pay back. So I think you can see why I say I studied the U. S. education system, which is built to enrich millionaires and billionaires, so that, as Norway's Minister of Education, I would do the opposite. In other words, I use the $4,000 or so we allocate to educating each student to actually educating each student. Now you will pay for your nice round-trip to and from Oslo with tax dollars and then return to a system designed to make millionaires and billionaires richer instead of educating your students the way they deserve to be educated. But...thank you for coming." 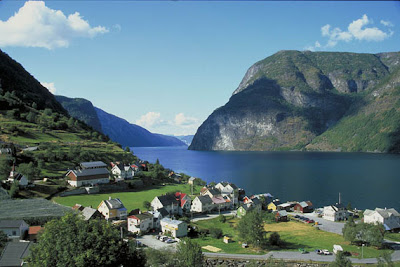 "OK," you wonder, "if beautiful Norway {above} has the best education system, the best health system, the best democracy index, no poverty, almost no crime, no wars, and the happiest people in the world, why don't Americans and Cubans try to move there? Uh, good question. Norway has five million people. The government, which has a socialist King and a socialist Prime Minister, takes care of them nicely and evenly. As mentioned, if the lush North Shore oil spigot was cut off entirely, the government has enough money set aside and drawing interest to take care of its people in the manner they are cared for now for the next 500 years. But while Norway is generous to others, including Cubans after Hurricane Sandy recently destroyed over 200,000 Cuban homes, it is not too inclined to invite millions of immigrants. Now, if Americans and Cubans want to spend tourism money in Norway, that is accepted on 15-day visas. On the 15th day, however, you had better be at the airport ready to depart because Norway does enforce its laws. And speaking of Scandinavians, they all seem to be robustly healthy and able to speak five languages fluently -- like, for example, Denmark's 22-year-old Caroline Wozniacki {above}. 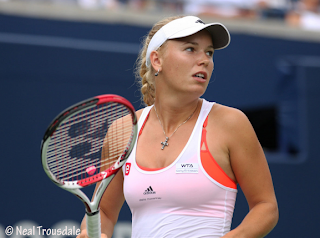 Known throughout Scandinavia by her nickname "Sunshine," Caroline Wozniacki has already spent time as the world's #1 ranked female tennis player. So, she has made millions on the tennis courts and millions more in endorsements. [Note: Caroline's boyfriend -- the world's #1 golfer, 23-year-old Rory Mcllroy from Northern Ireland -- is even richer than she is, but a lot less photogenic and not nearly as well educated}. 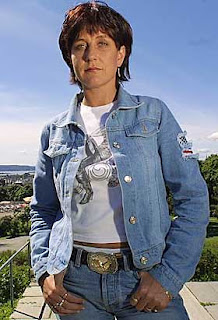 And did I mention that Norwegians are inevitably healthy, happy, beautiful, talented, safe, can speak at least five languages fluently, don't tolerate crime, and don't fight wars? Take Heidi Hauge {above}, for example. I'm a lifelong fan of country music. I discovered Norway's Heidi Hauge recently and now I consider her the world's best female country singer backed by the world's best country band. If you doubt that, go to YouTube and type in "Heidi Hauge Crystal Chandeliers" or "Heidi Hauge Seven Spanish Angels" or "Heidi Hauge Blue Eyes Crying in the Rain"and watch her sing, in perfect English, those and other classic songs. 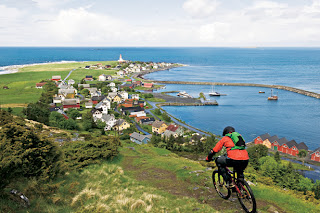 Hey! I'm too old and too poor to move to Norway and I'm not Norwegian enough anyway but, I confess, I would love for America and for Cuba to be more like....NORWAY! Peaceful. Beautiful. Safe. Rich. No glaring disparity between the haves and have-nots. Nice borders. Friendly with its neighbors. And I understand that in Norway there are no lobbyists, no bought-and-paid-for politicians, and no wall-to-wall political ads!
**********************