Because Cubans Are Humans Too 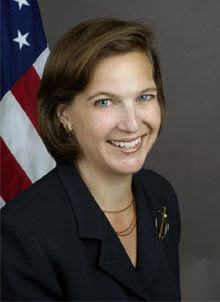 Victoria Nuland [above] is the top Spokesperson for the U. S. State Department. 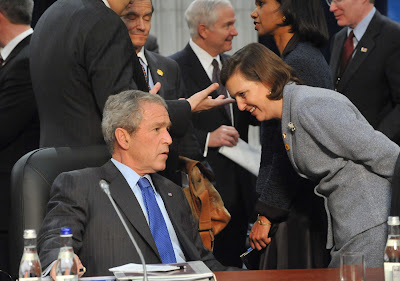 Victoria Nuland [above] worked for the George W. Bush presidency from 2005 till 2008, a tip-off regarding how she feels about 11.2 million Cubans on the island. Many believe that Cuba -- since 1492 when the explorer Columbus proclaimed it the "most beautiful land" he had ever seen -- has been used and abused by foreign powers long enough, not to mention too many centuries of being pummeled and pulverized by numerous natural as well as many man-made hurricanes. 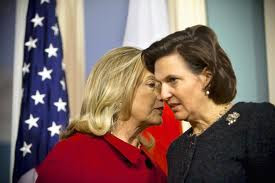 But as she transitioned smoothly from the Bush administration to Hillary Clinton's State Department in the Obama presidency, it's apparent that perennial politicos like Victoria Nuland take some sort of perverse pleasure in persistently punishing weaker woebegone souls -- all justified by some ancient antagonism for a now 86-year-old harmless, harried old man. Working for President Obama, we sort of hoped she would hate the Cubans on the island a bit more kindly although, of course, that hope was cushioned with trepidation based on all the decades of economic and political rewards such scavengers have gained from assaulting a smaller, vulnerable, sovereign nation. In a kinder world, the strong would pray with the weak, not prey on the weak. 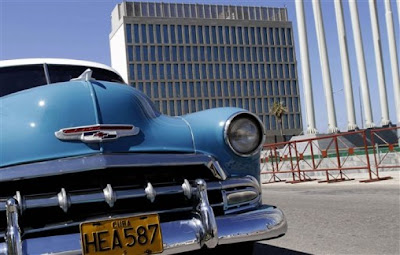 The above photo, taken by Franklin Reyes for the AP, paints a typical portrait of present-day Havana -- a 1950s-era Cuban car parked near the luxurious 7-story U. S. Interests Section building. The photo was used to illustrate the first article this month by Paul Haven, the very capable head of the Associated Press bureau in Havana. The article expressed Cuba's long-standing objection to a well-known irritant, namely "subversive activities" by the U. S. Interests Section "to undermine" the government of Cuba. Specifically this time, the article reported on "classes inside the walls of the U. S. Interests Section" that regularly recruit dissidents and then teaches them how to use the Internet "to undermine" the Cuban government. 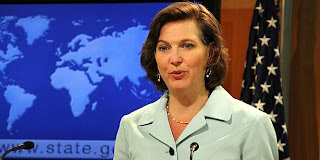 And that brings us back around to...Victoria Nuland. The AP's Paul Haven asked her about Cuba's complaint regarding the U. S. Interests Section in Havana recruiting dissidents and then teaching them how to use computers and then providing them computers to undermine the Cuban government. Victoria Nuland replied: "We are absolutely guilty of those charges. The U. S. Interests Section in Havana does regularly offer free courses in using the Internet to Cubans who want to sign up. We also have computers available for Cubans to use. Obviously this wouldn't be necessary if the Cuban government didn't restrict access to the Internet and prevent its own citizens from getting technology training." [Exact quotation; Paul Haven; AP; Nov. 2, 2012] Of course, Victoria Nuland also probably still blames Cuba for the crash of Cubana Flight 455 on October 6, 1976, because, as everyone is supposed to know, the U. S. is always blameless in its conduct regarding Cuba. 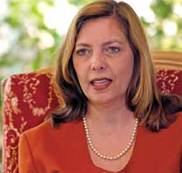 Josefina Vidal, Cuba's Minister of North American Affairs, was asked if she had any comments about Victoria Nuland's comments. Vidal replied: "Nothing really, except to say that she is once again telling us and the world that we are the superpower with a lot of nuclear missiles and Cuba is a little island with no nuclear missiles. Did we need to hear that again? She joins the chorus that preaches to the American people that in the 1950s the United States teamed with Mother Teresa, not the Mafia, to support a brutal, thieving dictator in Cuba. As long as Americans don't think for themselves, Cubans on the island will continue to suffer because of such cowardice and ignorance." 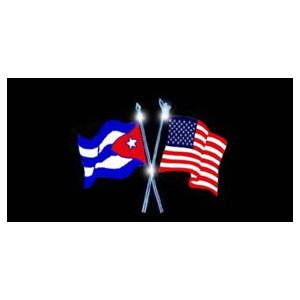 The point being: As usual, there are two sides to Paul Haven's AP story from Havana: Victoria Nuland has one side; Josefina Vidal has the other side. Usually, only Victoria's side sees the light of day in the Western media. Maybe, as Josefina opines, that does indeed and inevitably reflect which side has the nuclear weapons. 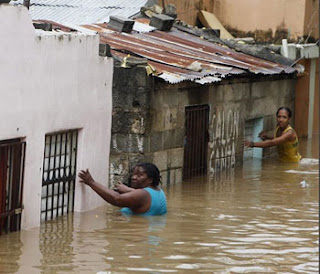 Last week Hurricane Sandy savagely and relentlessly pounded both neighbors, first eastern Cuba [above] and then northeastern U. S. coastal areas. Neighbors should help each other or at least express mutual concern for one another. Because of greed and ignorance, that simply does not apply to Cuba and the United States. And so, there will be more natural and man-made hurricanes...like Hurricane Sandy or Hurricane Victoria. And all the while, the majority of Cubans and Americans needlessly suffer to sate the endless revenge and financial motives of a heartless, nefarious minority. 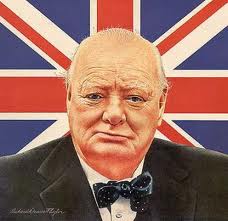 To paraphrase Winston Churchill: "Democracy is the worst form of government, except for all the others." Beyond doubt, U. S. - Cuban relations since the 1950s epitomize that quotation. To optimally function, Churchill realized that democracy requires more intelligence than ignorance and more compassion than greed. But since the 1950s, a handful of evil benefactors have prevailed over a cowardly, impotent majority when it comes to U. S. - Cuban relations. Thus, Winston Churchill would understand the Victoria Nuland-Josefina Vidal impasse that presently and precisely defines the neighborly relationship between Cuba and the United States. In other words, a few bad guys are winning and everyone else is losing. Little [5 feet, 4 inches tall] James Madison, the most esteemed graduate of Princeton University, was the smartest and most prescient of America's Founding Fathers. Four months before he died [on June 28, 1836] at age 85 on his Montpelier farm in Virginia, James Madison received a letter from his friend George V. Bass [that was in the good old days before cell phones and emails). George asked James what he could do "to solve a riddle," namely concerning why three of his prized goats had died in the past few days. James wrote back, suggesting that George should "closely monitor the diet of your goats." At the end of his letter George also asked, "So, how much longer do you really think your democracy will last?" James wrote back: "I think my democracy will last as long as our citizens remain strong and well informed, but like me, George, everything is mortal." 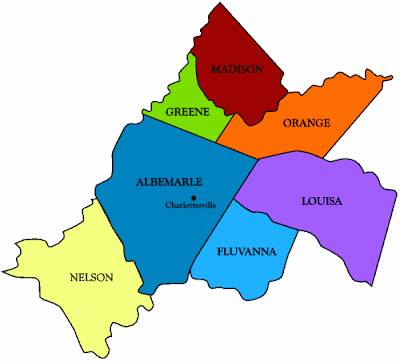 Having lived most of my life in Central Virginia snugly and modestly between Thomas Jefferson's Monticello and James Madison's Montpelier, the exchange of letters between Bass and Madison intrigued me. I believe James Madison would have concluded that his U. S. democracy lasted from 1776 till 1947. In other words, it took sick and began to die the year the secretive CIA was born just two years after the end of World War II. Like the 85-year-old James Madison, his 236-year-old democracy was not immortal. 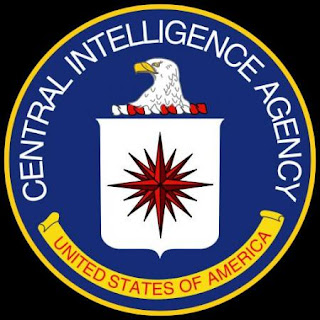 James Madison, who believed fervently in transparency and an informed citizenry as the twin pillars of a democracy, would surely have decried the foundation of the CIA, first its secrecy and secondly its predilection for foreign dictatorships beginning in the 1950s [like the 1952-59 Batista/Mafia dictatorship in Cuba]. But remember, in his letter to his friend George Bass, James Madison understood that both he and his democracy were "mortal." As usual, he was correct. Though he lived 85 years, James Madison's death was a tragedy. Though it lasted 236 years, so was democracy's. 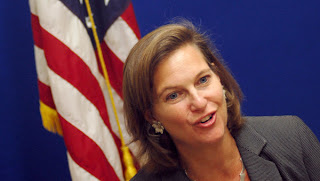 Therefore, in November of 2012, Victoria Nuland's scripted, mindless tirades against a sovereign neighbor, Cuba -- while it  reels from the aftereffects of Hurricane Sandy -- are uncomfortably reminiscent of, say, the CIA's tirades against Chile as a prelude to installing the U. S. - friendly Augusto Pinochet dictatorship back in 1973. As James Madison would have likely surmised, a smarter and stronger U. S. generation would have objected to that coup back in 1973, long before it read about the event in history books or on Wikipedia. Likewise, in November of 2012, Victoria Nuland's tirades against Cuba -- "Cuba exists for OUR benefit" -- resemble the CIA's tirades against Chile in 1973 -- "Chile exists for OUR benefit." So, round and round it goes and where it stops nobody knows. That includes Winston Churchill and James Madison in the past as well as Victoria Nuland and Josefina Vidal in the present.
**********