Brian Latell (Courtesy: Orlando Sun-Sentinel)
Former CIA agent Brian Latell years ago joined a very crowded field of Cuban profiteers in the United States. The effervescent and immutable anti-Fidel cottage industry -- spawned shortly after the overthrown Batista dictatorship in Cuba immediately, calamitously, and eternally reconstituted itself in South Florida in January of 1959 -- has produced literally thousands of economic and political fortune-seekers in the U. S., such as Mr. Latell. In dictatorial and Banana Republic fashion, most have been successful. 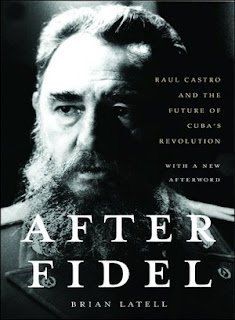 ﻿Latell's book After Fidel was quite slanted and inaccurate from a standpoint of both history and prognostication but that didn't matter because Latell's CIA/University of Miami/anti-Fidel credentials were all that was/is necessary for it to find a ready-made audience that insouciantly becomes a phalanx of enablers. As in the past and the present, a future avalanche of anti-Fidel, money-making, fact-deficient, and mindless rhetoric looms on the horizon to ingratiate a well-defined core. Unheeded and unneeded are such pillars as truth, transparency, and accountability because fairness or balance were vanquished decades ago within the bowels of the U. S. - Cuban diaspora.  Any caricature of Cuba is considered malleable to manipulation as it evolves into a mutually beneficial symbiosis between money and politics. 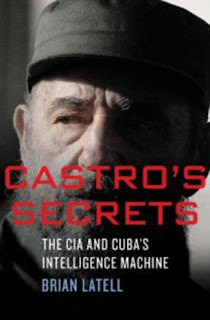 Now Latell's gravy train continues with a new sybaritic book entitled Castro's Secrets in which his latest cheap (but quite commercial) shot rather nebulously claims that Fidel Castro "knew" of President John Kennedy's impending assassination in Dallas. Of course, Latell's conclusion is laughable considering that at least half the planet's population "knew" that a bevy of killing machines -- the CIA, the Mafia, the Cuban-exile extremists, etc. -- were targeting JFK who was, among other things, being blamed for Fidel's victory at the Bay of Pigs, which translated to a CIA/Mafia/Cuban-exile debacle. Latell writes in Castro's Secrets, "Fidel knew of Oswald's intentions and did nothing to deter the act." Such a sentence is liable to create a metamorphosis of facts and fiction vacillating uncontrollably for decades to come, like an irrepressible but slow-moving tsunami that is more didactic than rapacious. 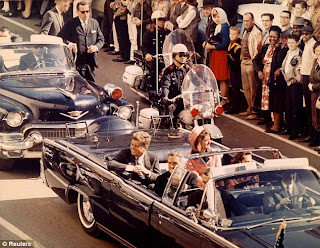 Linking Fidel Castro adversely to historic events, even those digested and regurgitated endlessly for decades, is equivalent to a greedy preacher supplying fodder to a choir of rich, gullible followers/acolytes before he passes around the collection plate. It's worked every time since January of 1959 so...why stop now? A visceral malaise of Fidelism, after this latest peccadillo of a book, must still be marinating in Brian Latell's CIA-spun and pecuniary-inspired depiction of a Cuban Revolution that he still wants to shape and conform, for topical/economic and historical/propaganda purposes, to the manner in which the CIA designed it. It works for Latell in uncontested books but not in a contentious world beset with whimsical vagaries, vacuous opinions, and a testy compendium of capricious counter-points. Latell's third Castro book should be upcoming soon, probably blaming Fidel for 1929's Saint Valentine's Day Massacre in Chicago because surely the then two-year-old Fidel "knew" about the slaughter in advance and, by golly, he still didn't warn Bugs Moran about what Al Capone was up to! But...hey, Brian!...don't let little nagging facts stand in the way of book sales when the uncontested topic is Cuba. 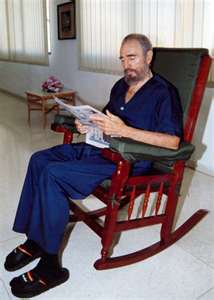 The convalescing, 85-year-old Fidel won't be around forever but, especially while he still lives and before his legacy begins to take hold, Brian Latell and the anti-Fidel cottage industry in the U. S. will continue to flourish. The melding of Cuba's Fidel or Fidel's Cuba with U. S. fortunes, both political and economic, might well constitute the old revolutionary's most lasting mark on such things as history, politics, capitalism, etc. For sure, his footprints on U. S. soil will be as deep as those he will leave behind in Cuban sand. The island, particularly the revolution that bears Fidel's stamp, remains as idiosyncratic as ever, especially when self-serving and one-sided commercial and chimerical gigs from old anti-Castro CIA agents rule the day, if not the roost. 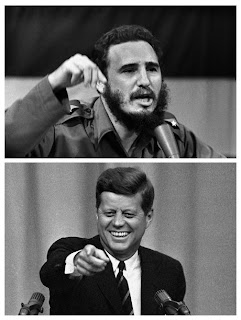 Certainly the Castro-Kennedy saga (1960-1963) deserves a truthful telling in the pantheon of Cuban, American, and world history. But the chroniclers of that history should be neither former CIA agents nor worshippers of either Castro or Kennedy. 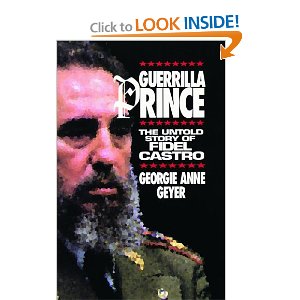 Georgie Anne Geyer's Guerrilla Prince, first published in 1991, remains the best and fairest account of Fidel Castro's life from his boyhood in Cuba till the 1990s. 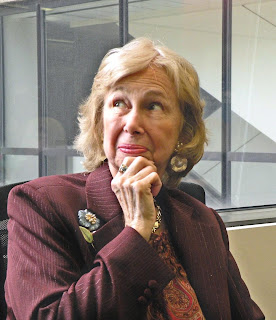 Georgie Anne Geyer, the great conservative nationally syndicated columnist, was born on April 2, 1935, and she is neither a former CIA agent nor a worshipper of Fidel Castro or John Kennedy. She is merely a great journalist and historian with dozens of honorary degrees, including three from journalistic powerhouse Northwestern. 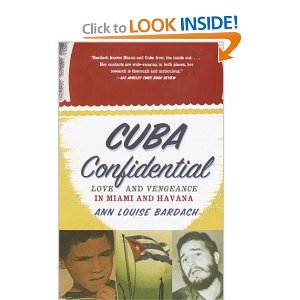 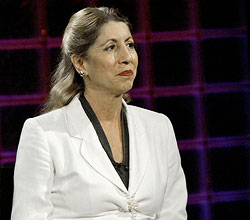 Since the 1990s Ann Louise Bardach has been the best, fairest, and most unbiased chronicler of Fidel Castro. Her classic books are must reads, especially if you have been influenced to the contrary by ex-CIA agents, spoiled daughters, or many others involved in the lucrative anti-Fidel cottage industries. If you are interested in unbiased facts about the fascinating and important U.S.-Cuban conundrum, dismiss the Brian Latell tales and focus on Ann Louise Bardach's books:
"Cuba: A Travelers Literary Companion" -- 2002
"Cuba Confidential: Love and Vengeance in Miami and Havana" -- 2002
"Cuba Confidential: The Extraordinary Tragedy of Cuba, Its Revolution and Its Exiles -- 2004
"Killed: Great Journalism Too Hot to Print" -- 2004
"The Prison Letters of Fidel Castro: Cartas del Presidio" -- 2004
"Without Fidel: Death Foretold in Miami, Havana and Washington" -- 2009
Bardach's publishers have been the major houses -- Random House, Scribner, Penguin, Avalon, etc. -- so they are still readily available and easily attainable at Amazon.com.
In addition to her seminal books, Bardach has written voluminously and brilliantly about U. S. - Cuban relations in articles and essays published by the New York Times, the Washington Post, Vanity Fair, The Guardian, The London Times, and many more of the world's top newspapers and magazines. If you seek the truth, visit the works of Geyer and Bardach; if you want commercial slants, buy Brian Latell's books or attend one of his University of Miami lectures or Miami Herald interviews.
******************************